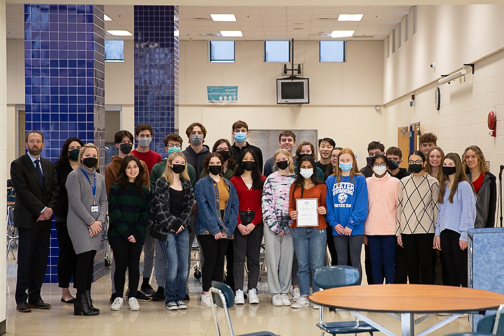 This morning, 20 juniors and 10 sophomores were recognized by Principal Tom Campbell, and Exeter Community Education Foundation (ECEF) Executive Director, Amy Lutz, and President, Angela Cooke, for their outstanding math or science achievements thanks to Dr. Harlan & Mrs. Carole Kutscher, longtime Exeter residents and supporters who created a $25,000 endowment for students through the ECEF. Their endowment recognizes students with a certificate and monetary award to celebrate the achievements of those who earned the highest weighted final grade in their 9th and 10th grade science and math classes.

Because this was the first year the endowment was established, the Kutschers felt it was important for them to double their gifts to juniors (who only had access to this award once). Next year, 10 sophomores and 10 juniors will receive awards from the endowment, with no winner receiving the award more than once so that other highly-achieving students can have a chance to be recognized.

Our warmest thanks to the Kutscher family for establishing this incredible endowment to recognize the academic achievements of our students, the ECEF for their hard work in coordinating the first year of these awards, and our congratulations to the following students who were recognized today for their outstanding academic work in math and science. They are: