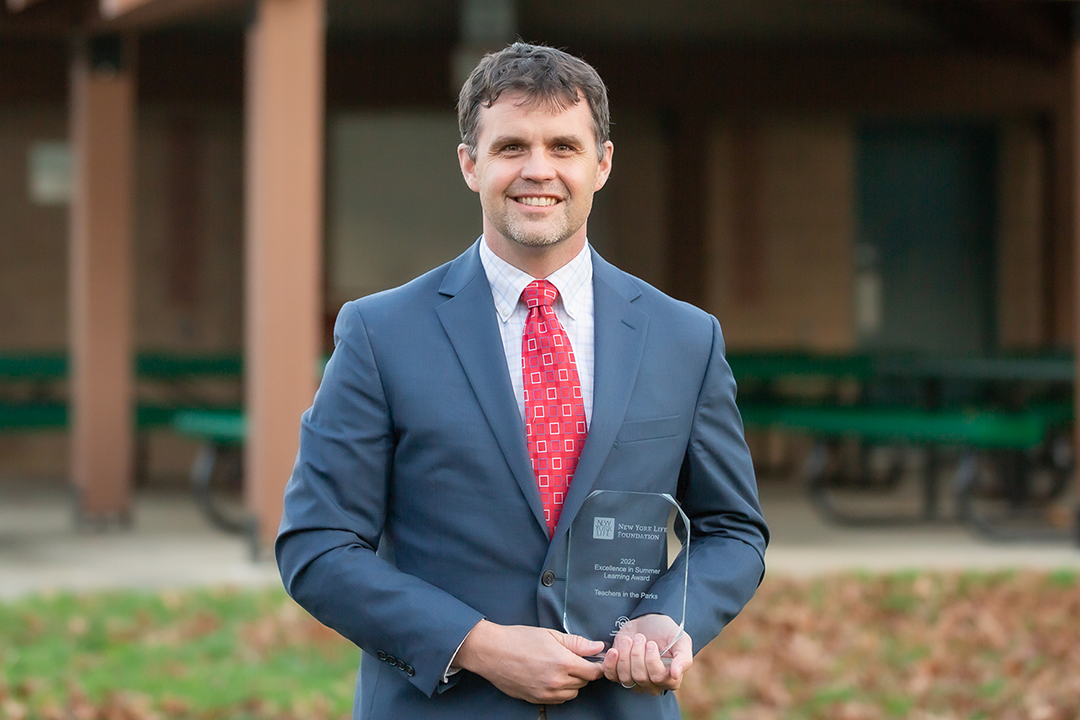 Jacksonwald Elementary’s principal, Mr. Matt Hathaway, will be recognized during Monday night’s 7PM Exeter Township Board of School Directors meeting for his receipt of the National Summer Learning Association’s Excellence in Summer Learning Award, which was presented to him in Washington, D.C. in October. The National Summer Learning Association (NSLA) selected Mr. Hathaway, who founded Teachers in the Parks (TIPs), through a rigorous review process to find the nation’s top summer programs committed to joyful learning experiences, innovative programming, creative family engagement and the health and well-being of the nation’s most underserved children and youth. TIPs was one of four programs honored at a dinner attended by more than 1,000 people in D.C., including U.S. Secretary of Education Mr. Miguel Cardona and U.S. Secretary of Labor Mr. Marty Walsh. Mr. Jim Quinn, the former president of Tiffany & Company and the current board chair of the NSLA presented Mr. Hathaway with the award following a highlight video that featured the Exeter and Antietam TIPs program.

“Teachers In the Parks started back in 2004 with a small group of students and teachers in Exeter Township, and is a shining example that a small, grassroots effort can be viewed as a model for affordable program solutions, community engagement, and instruction,” said the CEO of the NSLA, Mr. Aaron Dworkin. The other three programs who were recognized were the Boys and Girls Club of Santa Monica, California; The Fresh Air Fund of New York City; and ICAN of Chandler, Arizona.

The Exeter-based TIPs program came to national recognition in 2017 when the NSLA’s former communications director, Ms. Laura Johnson, approached Mr. Hathaway at a hot dog stand in D.C. and asked him to tell her more about TIPs and his thoughts about summer learning after she heard him speak at a U.S. Department of Education conference. Since then, Mr. Hathaway has gained national recognition as a leader on summer learning through his presentations at state and national conferences. TIPs, he says, has also become well respected as a leader on how to recruit and retain highly-qualified teachers who are willing to give up part of their summer vacation to work. “During the time of widespread teacher shortages, we are one of the only summer learning programs in the nation that has a waitlist of teachers who are willing to work over the summer,” he said, proudly. “I may be the guy up on stage accepting this award, but I really have to thank the teachers who gave up their summers to work when they didn’t have to.”

A teacher himself for 18 years, Mr. Hathaway founded TIPs “when kids just kept showing up” on his parents’ back porch during the summer after his first year of teaching third grade at Jacksonwald Elementary. Initially, his intent was to help a handful of kids prevent the “normalized” summer ritual of learning loss (otherwise known as the “summer slide”), but as more students showed interest in continuing to learn through the summer, and as word spread throughout the community about his lessons taught over popsicles on his parents’ back porch, Mr. Hathaway started to engage more kids by walking down to Lorane Hollow park. There, he spread out a blanket and informally invited kids to keep up with their literacy and math skills who were participating in Exeter’s summer Parks & Recreation program. Three summers later, the program had gained such popularity that Mr. Hathaway had to organize and hire teachers to keep up with the demand. Before COVID hit, TIPs could be found at six park locations around Exeter and up to a dozen other school districts in Berks where he subcontracted his program. He’s hired more than 200 teachers since 2007 and offered community service opportunities to roughly 300 students while serving hundreds and hundreds of Exeter and Berks County students who informally learn on blankets and at picnic tables in parks and at pools where they’d naturally hang out during the summer.

As the program’s grown beyond anything he ever imagined, Mr. Hathaway insists his mission has remained unchanged since that summer back in 2004 when he was sitting on his parents’ back porch. “Why do we let kids go three months over the summer without learning when we know it’s bad for them?” he asks, simply. “Literacy shouldn’t be seasonal.”

Humbled by being recognized for his grassroots organization among large, national non-profit organizations, Mr. Hathaway intends to use the national spotlight he’s been given with the award to continue his fight for state and federal funding for summer learning. “We’re coming out of a time where there was briefly money for summer learning,” he says in reference to the Elementary and Secondary School Emergency Relief (ESSER) grants that were provided to districts to fund summer recovery learning during the early days of the pandemic. “But now that those dollars are gone, if we’re going to find new solutions to bridge the gap, then we need to look at new ideas and models that put teachers in front of kids during the summer. The only way to do that is to provide affordable programs that partner with school districts and existing community organizations rather than competing with them,” he says. Pausing, he finishes his thought: “Because when you put teachers in front of kids, immeasurable things happen.”

As part of the award, TIPs will receive:

Mr. Hathaway will be joined at the Exeter Township Board of School Directors meeting by Pennsylvania State Senator Judy Schwank and Mr. David Volkman, the Executive Assistant to Deputy Secretary at the Pennsylvania Department of Education.