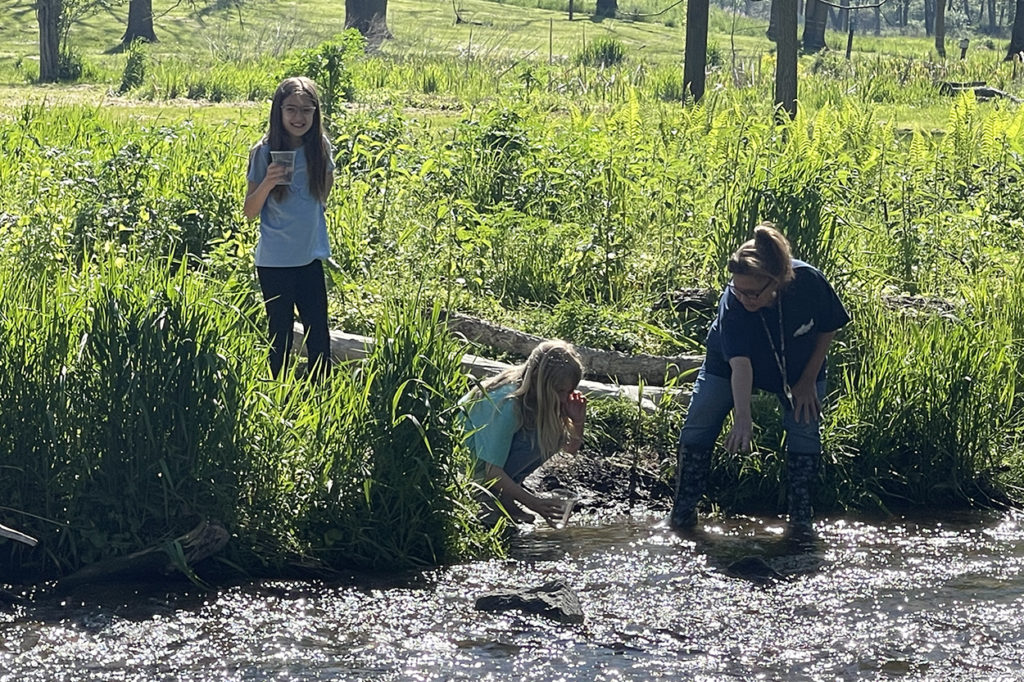 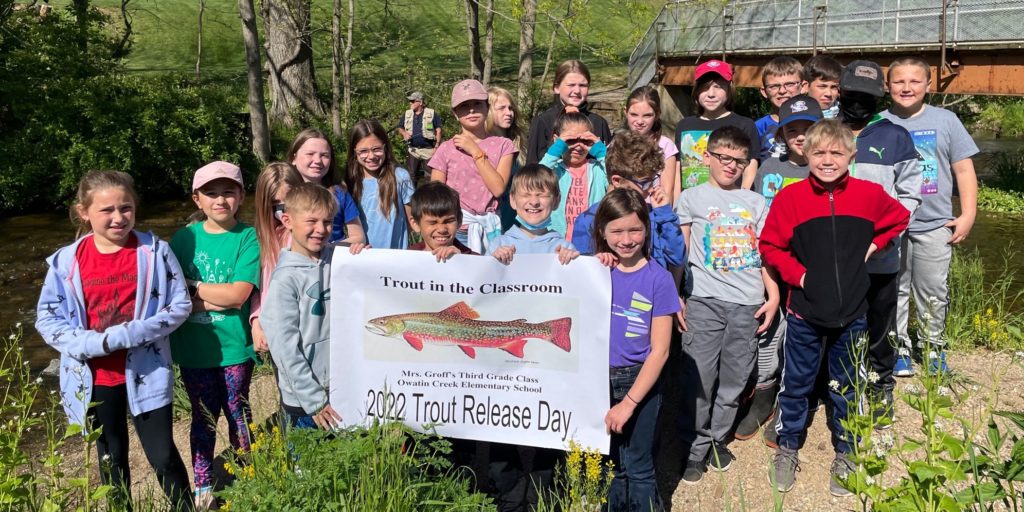 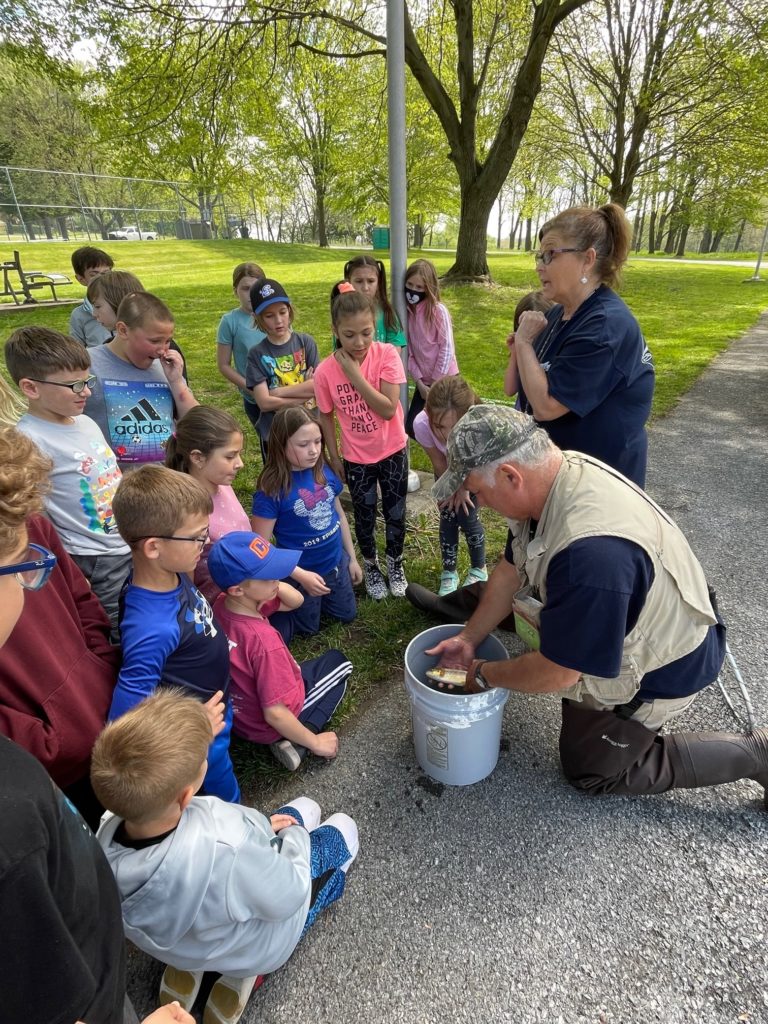 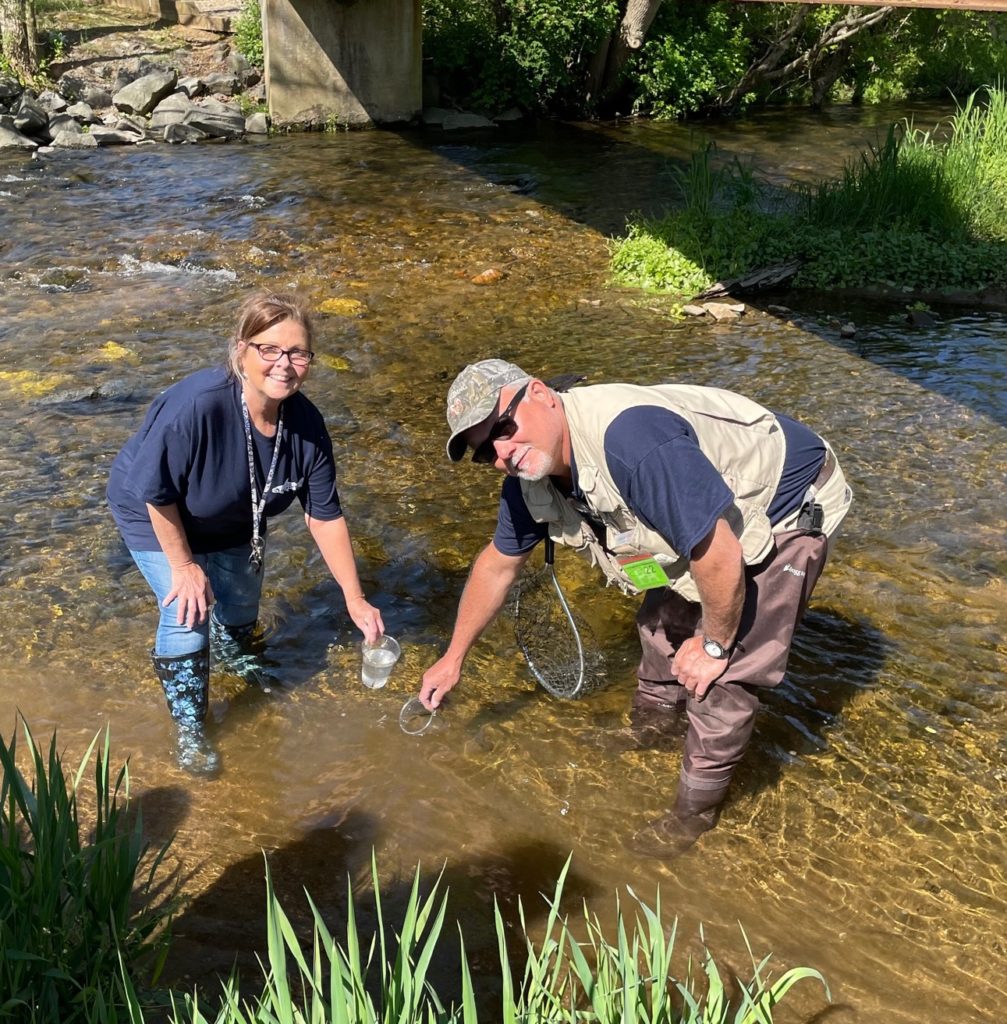 The mood outside on a bright and sunny May day last week was slightly bittersweet despite the finally-warm temperatures. Gathered around Antietam Creek at Happy Landings, students from Mrs. Groff's 3rd grade Owatin Creek classroom were delighted--and yet sad--to see their fellow "classmates" swim away. "Bye fishy! Have a good life!" said one, as she held a plastic cup to the creek to see a baby rainbow trout "fingerling" swim away. The release of the fingerlings that morning late last week was the culminating event in a months-long project that Mrs. Groff exclusively teaches at Owatin Creek called "Trout in the Classroom." The curriculum, which is taught in classrooms throughout the US and Great Britain, aims to teach students connections between trout, water resources, the environment and themselves by having students learn about aquarium setup, ecosystems, the life stages of fish, the environment of waterways, and then putting their knowledge to the test by raising fish from eggs to fingerlings, eventually releasing them into an approved waterway.

Mrs. Groff started teaching the program in 2017 after going through additional training to learn the curriculum through Penn State. She said that her interest in teaching "Trout in the Classroom" was a natural fit since her husband is an avid fisherman and her children, Brooke and Trent, were both named from his passion for fishing in Exeter. "I knew that my husband would help me on this adventure," she said with a laugh.

Students start by learning and setting up a cold-water fish tank in January. Soon afterwards, they receive baby fish eggs, which live in an "egg basket" until they're developed enough to eat fish food on their own and be released into the full tank. In the tank, they grow and mature until they’re old enough to be released into a natural waterway. Throughout the process, students learn about the life cycle of the fish as they develop from an egg to a fingerling--or as one student described, "We saw them as little babies and now we see them as little grown ups." Students keep a journal of their learning experience by drawing pictures and writing about aquarium equipment, fish stages, ecosystems and the waterways.

After months, the project culminates with students’ favorite activity: the release of their fingerlings at Antietam Creek. Carrying a cooler of baby trout, Mr. Groff accompanied his wife’s class to Antietam Creek last week, where they gave students clear cups filled with aquarium water and a baby fish. Carefully, each student then stood on the side of the creek to release their fingerling, happy–yet sad–to see them swim away.

Like her fish, Mrs. Groff also plans to “swim away” at the end of the school year after teaching for 32 years in the District. We share her students’ feelings of bittersweetness as we mourn the “release” of a great teacher, yet wish her a retirement filled with joy, relaxation… and lots of fishing!