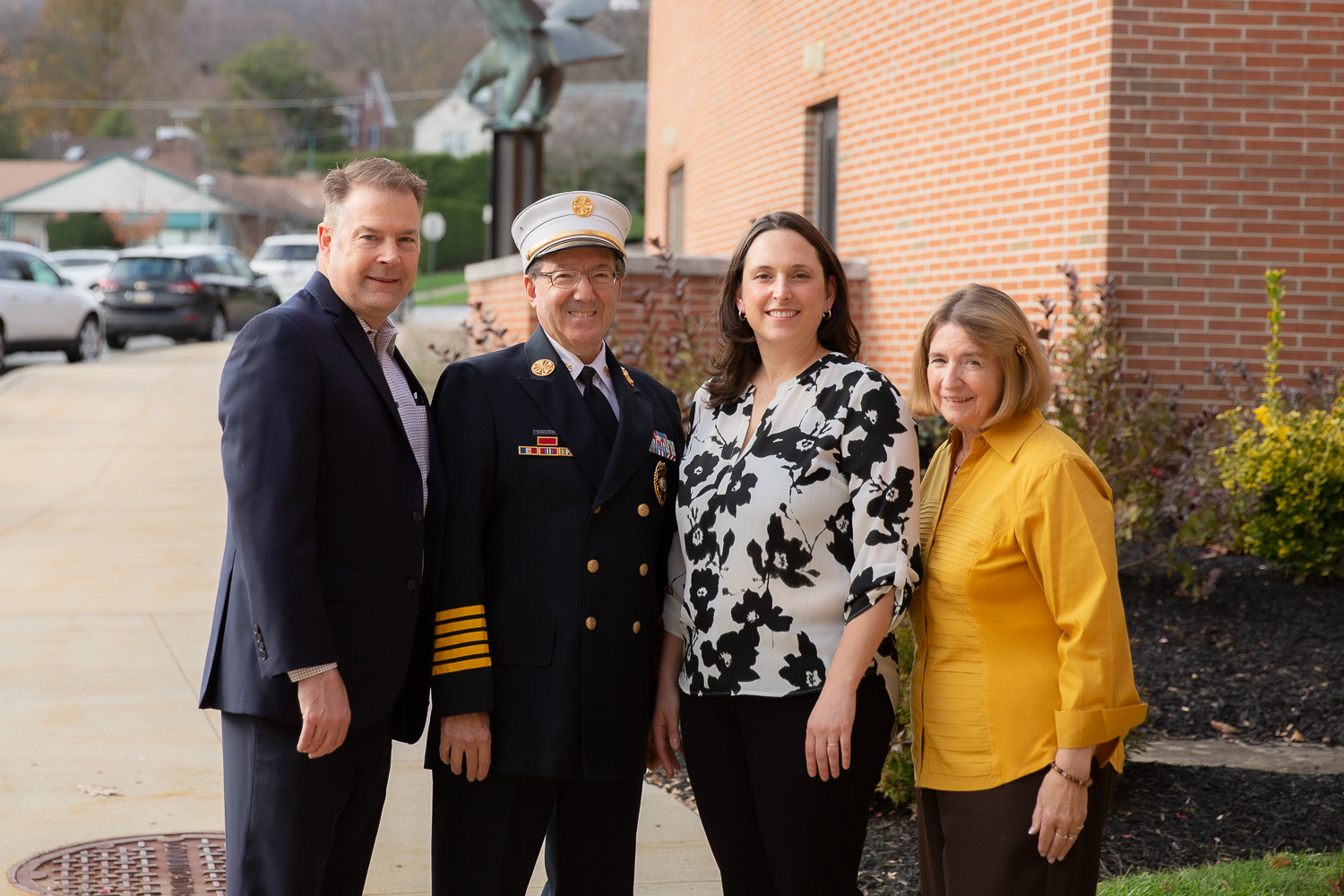 The Exeter Township School District celebrated the achievements of four notable alumni, educators or community members who were inducted into the Exeter Alumni Association’s Academic Hall of Fame during a moving candlelight ceremony on Saturday, November 12, 2022. Those inducted into the Academic Hall of Fame were Kevin DeAcosta ‘84, president and CEO of the Highlands of Wyomissing; Robert Jordan, retired Exeter Township Fire Chief; Dr. Andrea Smith ‘97, a maxillofacial prosthodontist; and Peggy Fleck, a retired school counselor. Inductees are chosen for their contributions to society and their impact and credit they've brought to the Exeter Township School District through their achievements, volunteerism and/or work.

Mr. DeAcosta remarked during his speech that he was surprised to have been selected into the Academic Hall of Fame as he did not consider himself an exemplary student while at Exeter. In fact, he said, he read his first book in high school. “It wasn’t that I couldn’t read,” he said. “I couldn’t comprehend what I was reading. Said differently, I could recognize words but I didn’t understand their meaning… I was just instructed to go to the ‘special’ reading room. Think of the stigma associated with this,” he said to the hushed audience. Continuing, he recounted how an Exeter Reading Specialist, Mrs. Peggy Hart, patiently taught him how to comprehend the words he was reading, which, he said, changed the course of his life, allowing him to graduate cum laude from Alvernia University with a degree in accounting following his service in the Navy. Today, he serves as the Highlands of Wyomissing president and CEO and is a community leader and volunteer for many area non-profits. “I believe as I get older and think back, she will be the teacher that I think of the most because reading and communicating are so important in business, life and relationships.”

Mr. Jordan lived and raised his family in Exeter after he married, joining the Reiffton Fire Company in 1978, eventually becoming Chief of the company in 1996. In 2009, he became the first Fire Chief of the newly merged Exeter Township Fire Department when the Reiffton and Stonersville Fire Companies joined together. During his professional career, Mr. Jordan led numerous educational efforts of fire safety for students in Exeter schools.

Dr. Smith is one of only 350 maxillofacial prosthodontists worldwide. She was valedictorian from both Penn State University’s Eberly College of Science and Columbia University’s College of Dental of Medicine. She completed her residency in advanced prosthodontics and her fellowship in maxillofacial prosthetics at UCLA. Upon her return to Pennsylvania, Dr. Smith became the first female clinical director of the Lancaster Cleft Palate Clinic until she joined Berks Prosthodontics.

Mrs. Fleck was selected as Pennsylvania’s Elementary School Counselor of the Year in 1991. At Exeter, she was responsible for introducing elementary developmental guidance programs to the district, where she also coached students and supported students outside of the classroom.

The Academic Hall of Fame began in 2005 as a project of the Exeter Community Education Foundation and typically selects four to six inductees each year. This year's class brings the number of honorees to 74, who are presented with a plaque, as well as their names added to a display in the Senior High's main office. 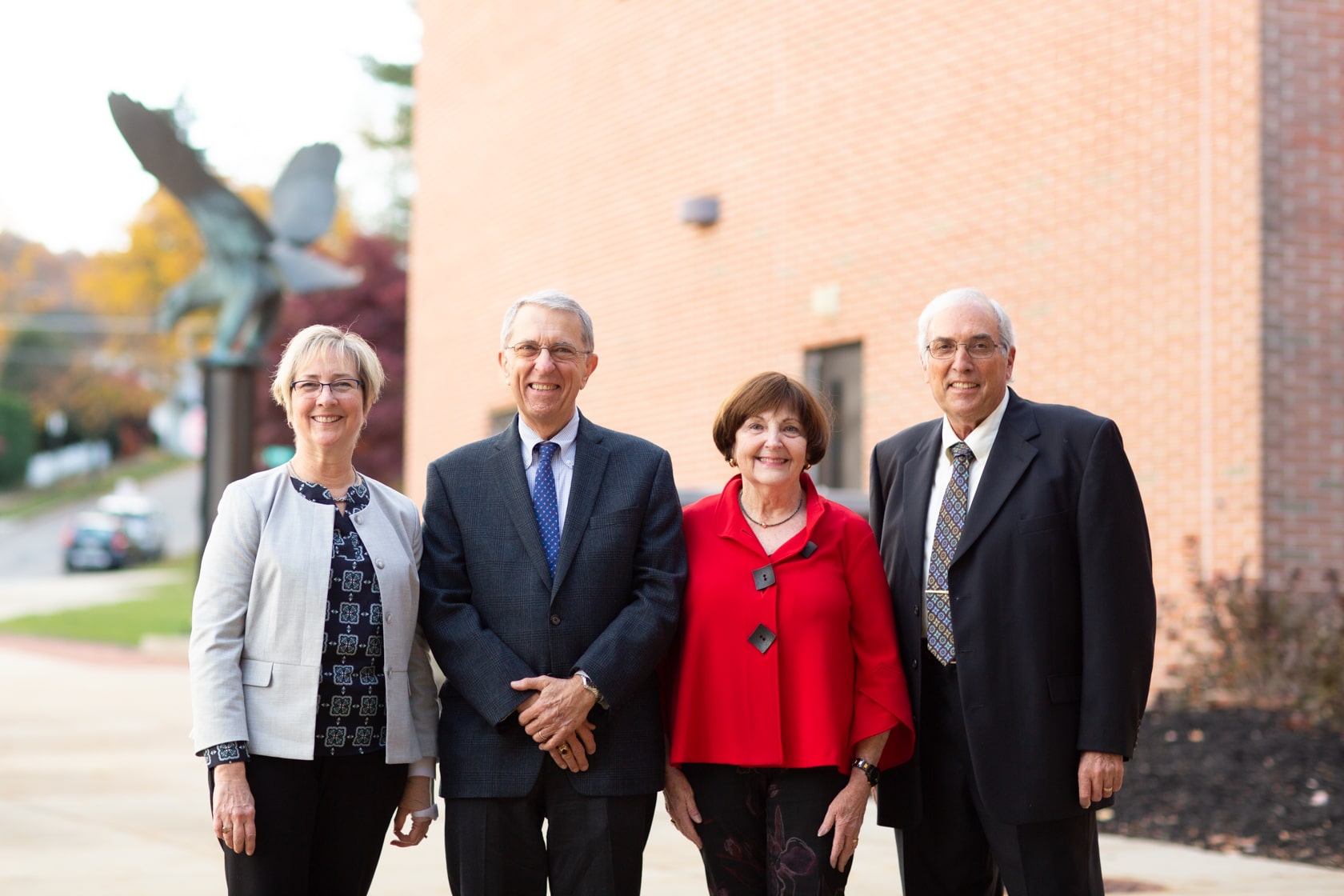 The ETSD's Alumni Association and Academic Hall of Fame Committee celebrated the academic achievements of both current and past students during a moving candlelight ceremony at the Senior High on November 13, 2021. During the ceremony, Mr. Harry Koppenberg (first photo, right), an educator in the district for nearly 40 years; along with alumni Dr. Debra Powell '78 (left), Chief of Infectious Diseases, Medical Director for Infection Prevention, and Vice Chair of Medicine at Tower Health Reading Hospital; the Hon. Richard Adams '59 (second from left), an environmental lawyer and judge of the Connecticut Family Support Court; and his wife, Mrs. Merrill Adams '60 (third from left), a former English and drama professor at Wesleyan University and founder of the Coginchaug Valley Education Foundation in Connecticut, as well as a poet and award-winning pastelist, were all honored for their contributions to society and their impact and credit they've brought to the Exeter Township School District through their achievements, volunteerism and/or work.

The Academic Hall of Fame began in 2005 as a project of the Exeter Community Education Foundation and typically selects between four to six inductees to be honored each year. This year's class brings the number of honorees to 70, who are then presented with a plaque, as well as their names added to a display in the Senior High's main office.

The ceremony was followed by the induction of 75 Exeter students into the Claude W. Dundore Chapter of the National Honor Society.

A reception was held after the inductions.

The district’s Hall of Fame was started in 2005 as a project of the Exeter Community Education Foundation. Typically, four to six inductees are selected each year. This year’s inductees bring the total number of honorees to 66.

The four new members were presented with plaques. Their names will be added to the honor roll displayed in the high school’s main office.

This year’s honorees are:

Kenneth P. Levan, a 1963 graduate. He taught English and journalism at Daniel Boone High School for 36 years. Levan served on the Exeter School Board for 12 years, the last eight as president, and was president of the Exeter Community Education Foundation for its first 12 years.

Tanya H. Morret, 1987 graduate. Morret taught middle school social studies and gifted classes before pursuing a doctorate in curriculum and instruction. She consults with districts across Pennsylvania for school improvement and gifted education.

Edrie J. Watson, who began her career with the school district by teaching sixth grade at Jacksonwald Elementary School. Watson earned a bachelor’s degree in elementary education from Shippensburg State College and a master’s degree in music from Penn State University. She taught sixth grade at the former M. Luther Lausch Elementary School for 25 years before retiring from a 32-year career in 1992.

Two former teachers and one Exeter High School alumnus were inducted Saturday into the Exeter Academic Hall of Fame.

Ellen L. Gallagher, a retired teacher, was inducted during a special ceremony in the Senior High School auditorium.

Gallagher, who lives near Flying Hills, taught 31 years, 24 of them at Lorane Elementary, holds a bachelor’s degree from Millersville University and a master’s from Temple University.

Her mission, she said, was to help students understand the delicacy and interdependence of life on Earth and the magnificence of the universe.

Gallagher, a finalist in the Teacher in Space program, helped organize the district’s youth soccer league and wrote scripts for the Association of Parents and Teachers’ shows, a scholarship fundraiser.

The other two inductees received the honor posthumously.

Sara Jane Sechrist, who taught third grade in the district, died in 2017.

Passionate about the outdoors and conservation, she was a founding member of the Pagoda Ramblers camping club and enjoyed hosting friends and family at her log cabin in Tioga County.

Finley was a faculty member at the University of Pennsylvania’s department of radiation oncology and director of the university’s Master of Medical Physics program.

The academic hall of fame is a project of the Exeter Community Education Foundation.

The Exeter School District will induct two graduates, a retired teacher/graduate and a retired administrator into the district's Academic Hall of Fame for 2017.

The district's Hall of Fame was started in 2005, said Kenneth P. Levan of Exeter Township, a 1963 graduate of the district and member of the selection committee. Typically, four to six inductees are selected each year by the committee, he said.

This year's ceremony will be held Saturday, Dec. 2, in the high school auditorium prior to student inductions into the National Honor Society, Levan said.

The 2017 Academic Hall of Fame inductees are:

Bivans was part of the team that developed the algorithm for the Viking Mars Lander's soil-analysis system. He also earned patents for Saran-coated films and the Aeropak plastic fuel tank for automobiles, Levan said.

Corbin graduated from the University of Pittsburgh School of Law in 2006 and has been involved with a number of charitable activities in the Pittsburgh area, Levan said, most notably the Big Brothers Big Sisters of Greater Pittsburgh. He has volunteered as both a Big Brother and a member of the agency's board of directors, serving as president in 2014-15.

Yoder was inducted in 1996 into the Berks County Field Hockey Hall of Fame as an official. During her 30-year career as a health and physical education teacher and coach for the district, Yoder strove to have a positive influence on her students, Levan said.

Rabena served 27 years as a principal at Lorane and Lausch elementary schools before retiring in 2002, Levan said. He was a champion of the prefirst program and helped design the new Reiffton school.

Four new members have been inducted into the Exeter School District Academic Hall of Fame during a ceremony at Exeter Senior High School.

Three of them are Exeter alumni, and the fourth is a former teacher. Inductees are selected based on three categories: former students who have brought honor to the school district; former educators who are deemed to have had a tremendous impact on students and the district; and community people who have made a lasting contribution to education at Exeter.

Richard S. Nye, a 1991 graduate, has established himself as a professional musician, performing on viola with area symphony and chamber orchestras. He also has enjoyed a fulfilling career in education at the secondary level as an orchestra director and string educator within the Pennsylvania public school system.

Thomas L. Hanson was an Exeter teacher who came to education late. A superb naturalist, he found joy in working with young people. He loved and respected his students, and though his teaching career was cut short by a terminal illness, the years he spent at Exeter were said to be the happiest of his professional life.

Lawrence W. Houp, a 1965 graduate of Exeter and 1969 graduate of Muhlenberg College, was a partner in Houp Brothers Farm. He served on the Exeter School Board, the Berks Career & Technology Center Joint Operating Committee board and the Berks Vocational and Technical School Authority. He has served as president of the Exeter Eagles Alumni Association and was one of the people over the years most responsible for founding the alumni association.

Kristin L. Dreazen grad- uated from Exeter in 1991. Since graduating from Gettysburg College, she has spent her entire career in education, first in university admissions offices and then as a counselor in London. She is passionate about her work in assisting students’ transitions to higher education.

Three were inducted into the Academic Hall of Fame in 2015. They were:

An educator who teaches teachers, a journalist and college instructor, a high school teacher and athletic coach, and a businessman from Pakistan who is known on a first-name basis across Berks County - those were the four new members inducted into the Exeter School District's Academic Hall of Fame during a Saturday event at the high school.

Inductees are selected based on three categories: former students who have brought honor to the school district; former educators who are deemed to have had a tremendous impact on students and the district; and community people who have made a lasting contribution to education at Exeter.

Five were inducted into the Academic Hall of Fame in 2015. They were: