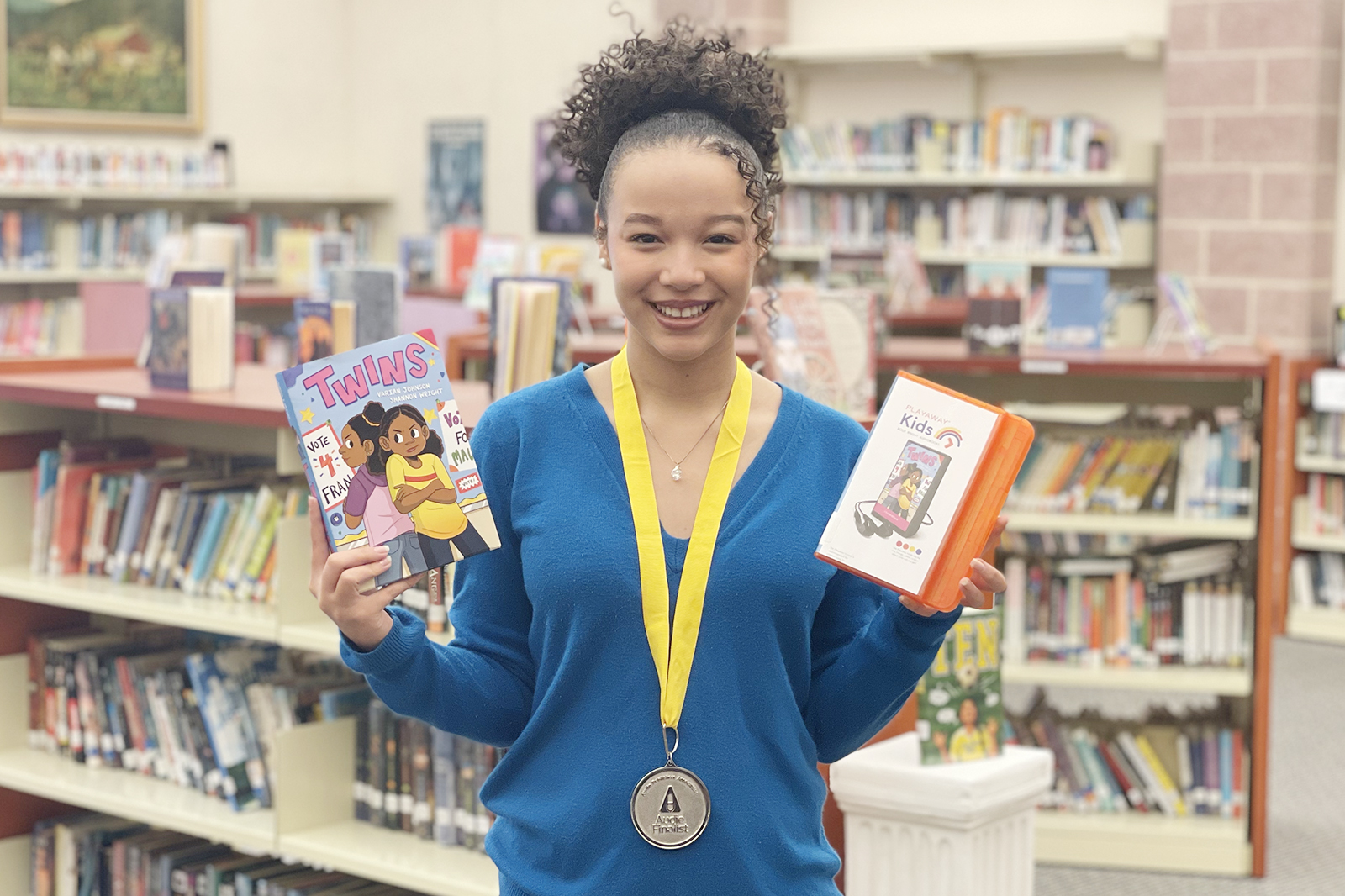 Ahnya O'Riordan holds up a copy of "Twins" and the accompanying audio book she donated to the Reiffton library.

Exeter student Ahnya O'Riordan joined the company of Barack Obama, Jamie Foxx, Oprah Winfrey, Lin-Manuela Miranda, John Lithgow and other notable authors and performers as she was recently named a finalist for the 2022 Audie Awards, which recognize distinction in spoken word entertainment and audiobooks. Sponsored by the Audio Publishers Association (APA), Ahnya was nominated in the Multi-Voiced Performance category for her joint narration of “Twins,” which was written by Varian Johnson, and was also narrated by Grace Capeless, Mashari Bain, Malcolm Bowen, Antoinette Comer, André Blake, Armand Xavier and Rufen-Blanchette.

Published by Scholastic, Ahnya described the book as a multi-award-winning graphic novel about twin sisters who are best friends. “Maureen and Francine do everything together and share all the same experiences. But once they start 6th grade, Francine decides she has new interests and wants to be more independent. Maureen struggles with this, but finds her own strengths along the way.” Ahnya, who voiced Maureen in the story, loved the story so much that she decided to share it with other Exeter students by donating copies of the audiobook to the Reiffton and Jacksonwald libraries.

A performer since she was 4 years old, Ahnya said that she truly enjoyed the process of recording the story. “This project was a lot of fun. Once I booked the job, I was given the entire contents of the pages, which I had to read and get very comfortable with. I then went to a recording studio in New York City to record each line. The actor who voices my twin sister was there as well, so we were able to meet, get chemistry and record together.”

When she heard she was named a finalist, she said that she was very excited, but also so grateful for the experience. “Everyone did such an awesome job bringing the characters to life, and I'm grateful to be a part of it! I was very excited to hear about the awards!” The winners of the Audies will be announced during a virtual ceremony hosted by Kal Penn on Friday, March 4, 2022 from 9-10PM, and can be viewed online at https://www.youtube.com/c/AudiobookCommunity

Ahnya attended Exeter schools through 6th grade, and then switched to the Exeter Cyber Academy in junior high so that she could travel the world and perform as a member of Kidz Bop and pursue her musical and acting career. Now a senior, Ahnya will graduate from Exeter in June, and plans to attend college for Forensic Psychology as she continues to work as an actor. Congratulations Ahnya–we are all rooting for you on March 4th!