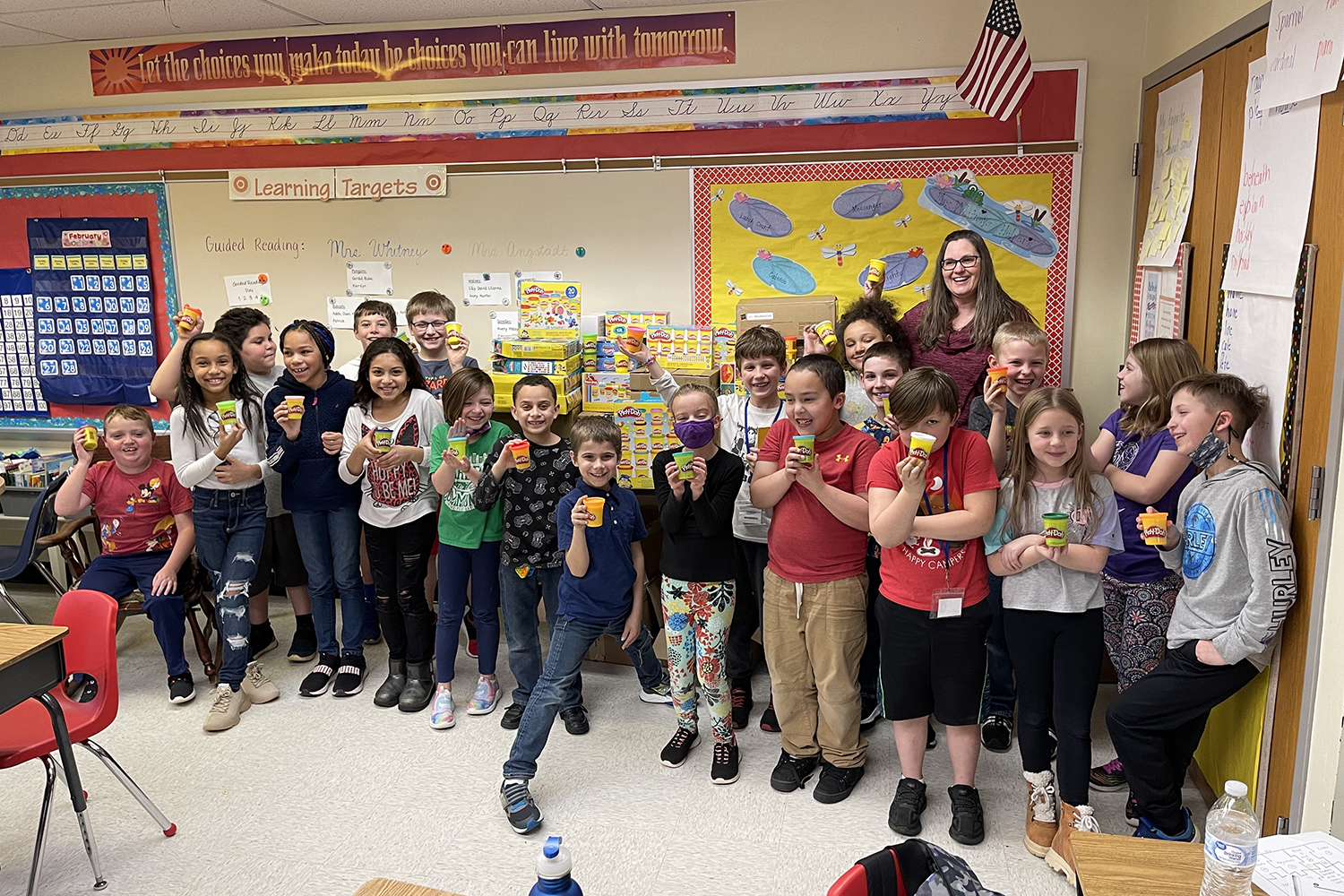 For nearly a decade, Lorane Elementary’s third-grade teacher Josie Whitney has spent the month of March honoring a little boy who she never knew and never had a chance to attend the school where she teaches.

When school started in the fall of 2012, she found out that Jason Heckman, the 3-year-old brother of her third-grade student, Sherry Heckman, was diagnosed with cancer. Then, just a few months later, Mrs. Whitney lost her own father when he passed away in January of 2013. Heartbreakingly, Jason then passed away from his illness in May–coincidentally, on Mrs. Whitney’s father’s birthday. “Having just lost my dad a few months before we lost Jason, I was a mess. I immediately reached out to his parents and walked over to their house during my planning period and asked what I could do to help. Jason’s mom mentioned that Jason loved fishing–and so did my dad, so my connection to his family felt even stronger–and that he loved playing with Play-Doh when he was receiving treatment at CHOP.” Jason’s mom explained that the children’s hospital was always in need of new cans of Play-Doh since the toy cannot be sanitized in between uses and has to be tossed after a single use. “That’s when I decided to have a Play-Doh drive to honor Jason and keep his name alive for his family,” said Mrs. Whitney.

In the following school year of 2014, Mrs. Whitney began organizing a school-wide Play-Doh collection annually every March to honor and remember Jason. To date, she’s collected over 10,000 cans of Play-Doh to donate to CHOP, even when she had to pause the collection in 2020 and 2021 due to the pandemic. She hopes her collection this year may prove to be the best year yet–she said she’s collected just over 2,000 cans since the month-long drive began on March 1st.

Although the drive was borne out of an excruciatingly sad event, Mrs. Whitney said that she sees joy in the students who choose to participate and her own students who get excited when the donations roll in by helping her count the donated cans each day as a math exercise. “Students love seeing me in the hallways at school and shouting, ‘I have Play-Doh for you, Mrs. Whitney!’” She also said her heart’s filled with gratitude when she sees her social media posts shared and donations come in from beyond the Lorane Elementary community, too. “The parents of a student this year have also promised to match the Play-Doh donations that their son receives. It’s truly blossomed into a community event.”

Mrs. Whitney also feels fortunate to continue to be connected to the Heckman family, even though it’s been a long time since Sherry, who’s now a senior, has walked the halls of Lorane Elementary. “I currently have their son Neo in my class,” she says, also mentioning that she also taught Brody, who’s now in 8th grade. “This drive is all about Jason and what donations can do for children in need. Even small donations add up to help,” she says, “And it all helps their families, too.”

If you’d be interested in contributing to Mrs. Whitney’s Play-Doh drive, you can drop donations of new cans of Play-Doh off at Lorane Elementary between the hours of 9AM to 4PM or deliver new cans of Play-Doh through Amazon, WalMart, Target or other online retailers to the school:

Lorane Elementary’s Play-Doh drive runs through the end of March, just in time to celebrate Jason’s birthday; he would have turned 13 on April 10, 2022.