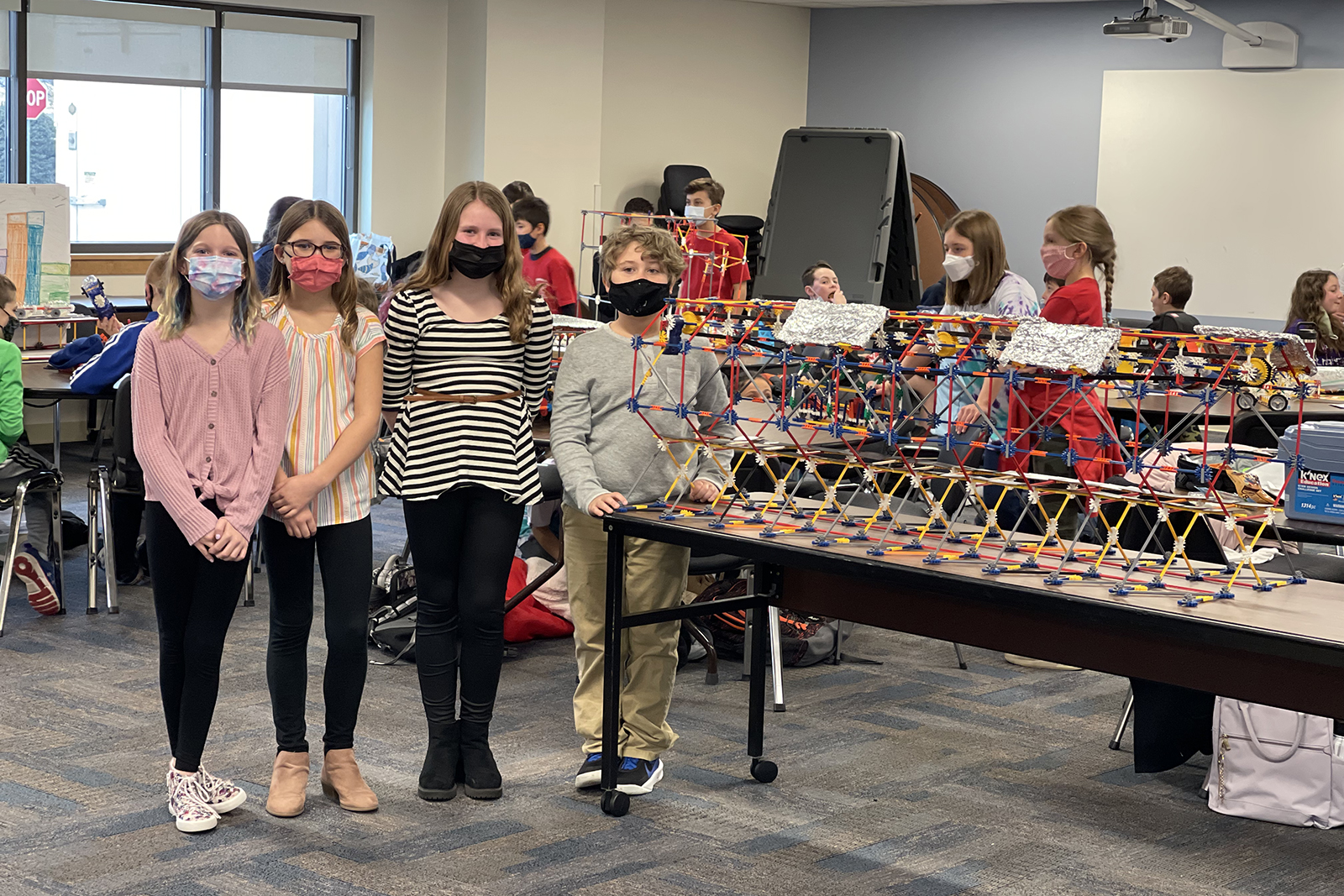 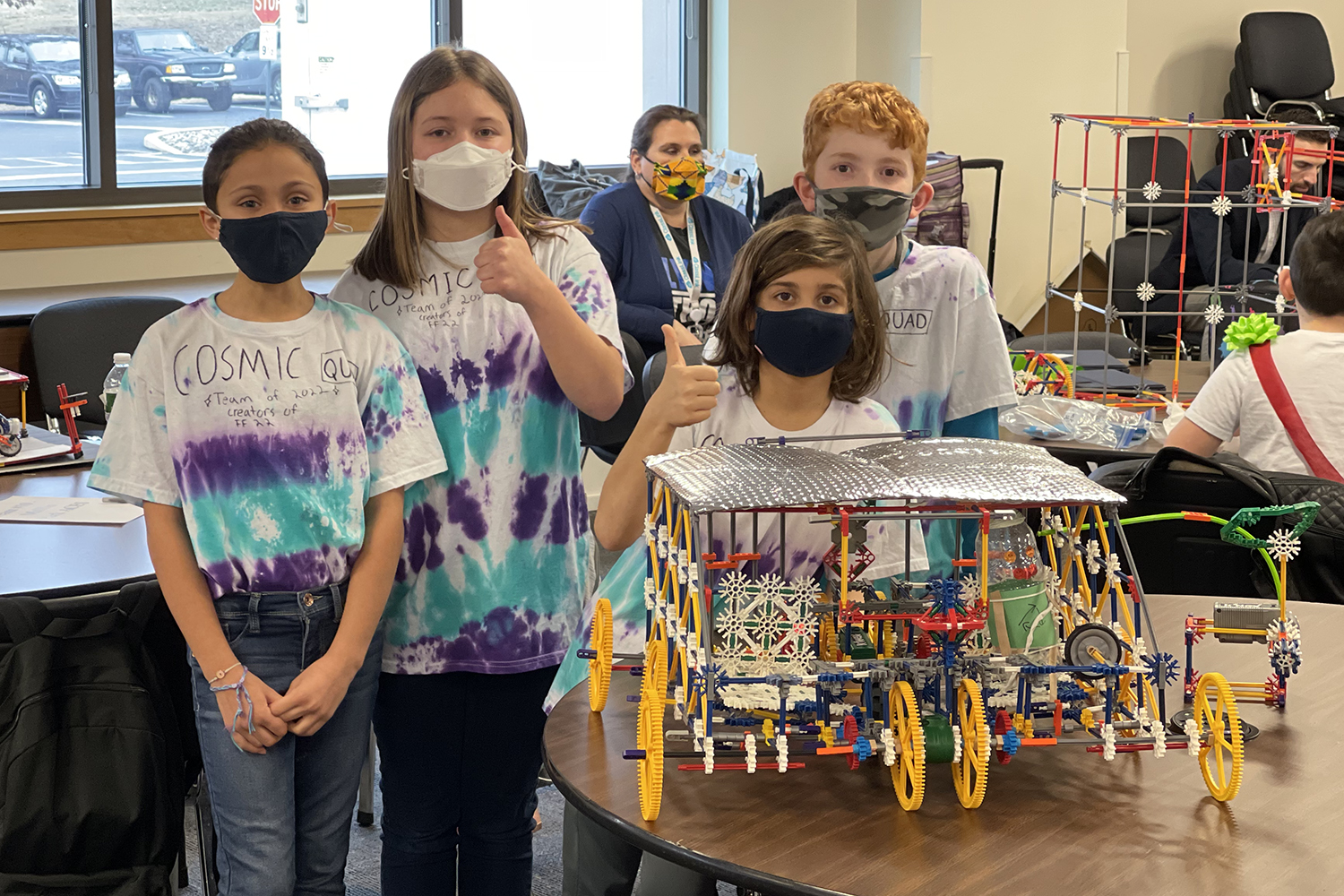 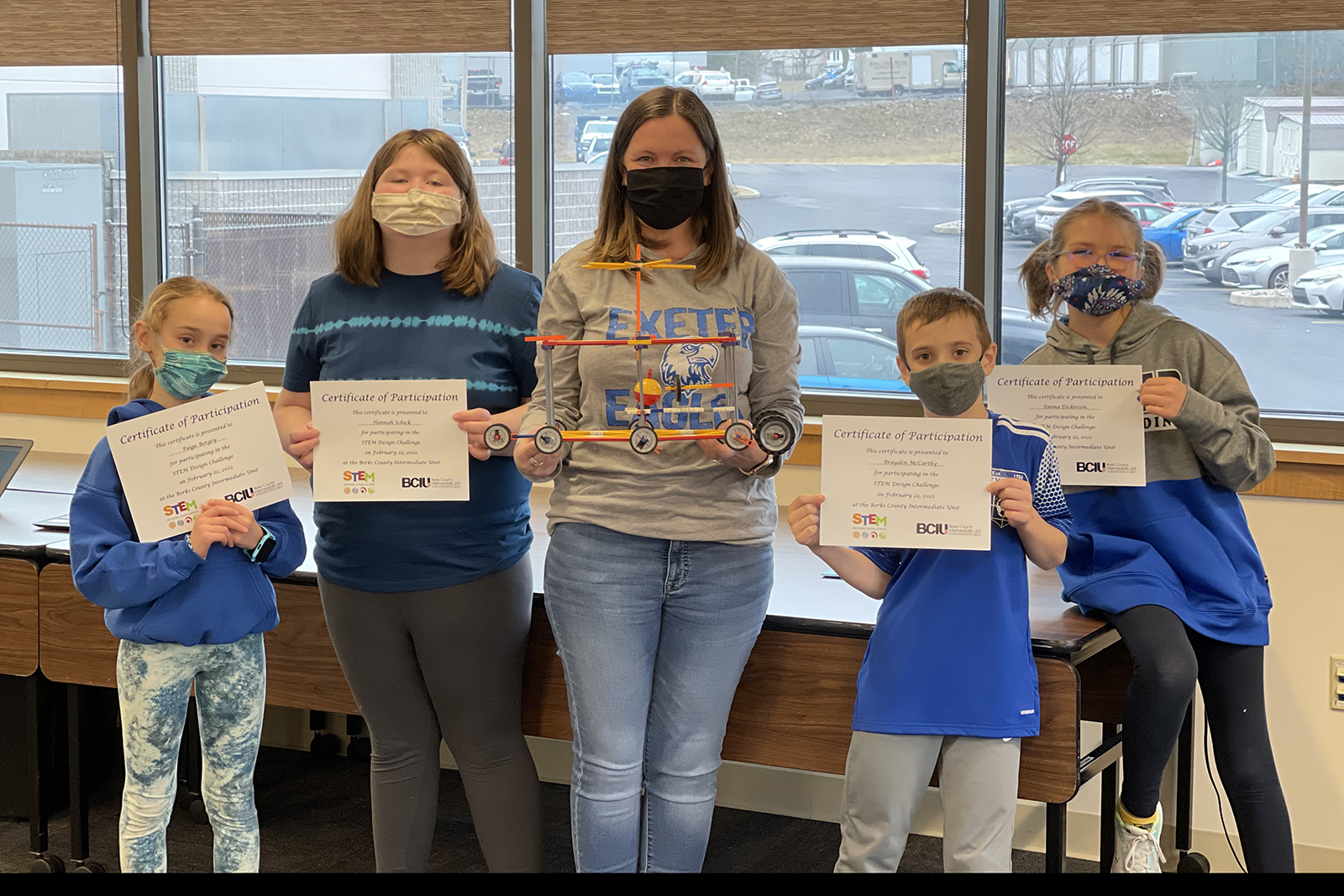 Teams of fourth-grade students from Jacksonwald, Lorane and Owatin Creek dreamt up new innovations to solve modern-day problems using just K'Nex building pieces, teamwork, and a whole lotta brain power during the 2022 BCIU STEM Design Challenge held yesterday at the Berks County Intermediate Unit. The design competition challenges teams of four students from each elementary school to build a unique prototype using K'Nex building pieces. To prepare for the competition, teams spent several weeks before the competition working together to identify a modern-day problem, imagining a prototype that they could build to solve that problem, creating computer-designed blueprints and models using CAD software, and then practicing building their finalized prototype using K'Nex. Along the way, students documented the process by keeping a design notebook and writing a script for their design presentation. When the challenge day actually arrived, teams had just two hours to build their K'Nex prototype from scratch and less than two minutes to impress and wow the judges with their presentation--and Exeter certainly did just that with Jacksonwald winning "Fan Favorite" and placing second, and Owatin Creek placing third against 35 other teams of fourth and fifth graders from other Berks County schools!

Here's what our teams designed:

When describing their invention, which they called "The Hyperloop," the team said that they were inspired by Elon Musk's idea of creating a high-speed train that uses magnetic propulsion inside of a low-pressure tube. Describing their model, the team said, "The Hyperloop uses magnetic levitation, magnetic propulsion and a pressurized tube to move a pod contained within it. We were looking through futuristic inventions, and we came across the Hyperloop and we saw that it was environmentally friendly because it used solar panels, and it was super handy because it moved objects really fast. We wanted something really futuristic."

Owatin Creek's Cosmic Quad named their human and solar-powered car prototype the "Foot Fusion 22," and said: "The vehicle we created is powered by pedaling, but it has a back-up battery, which is charged by the solar panel charging station. We were thinking about the buggies at the beach and how you pedal them, and we hope that a vehicle like this one day would help the environment and also help people get more exercise." They said that their idea took a long time to coalesce, but once they became inspired, "it just popped!"

Also thinking about environmentally-friendly ways to transport people, Lorane's team designed a wind-powered car that was powered by a windmill that sat on top of the vehicle. "Our car doesn't use any gas, so it stops pollution in the air. We came up with this idea because we first thought of a solar-powered car, but since there isn't always sun but there's usually always wind, we thought that would be a better option." The team laughed because they said that when they first designed the car it had a very "wonky" shape, but that through trial and error with their CAD software, they came up with a better design that they all agreed on and finally worked after "many, many tries." Describing the competition, they said "It was so much fun! And now we want to play with K'Nex more!"

Way to go Exeter! We are excited to see where these incredible ideas may lead our next generation of inventors and engineers!